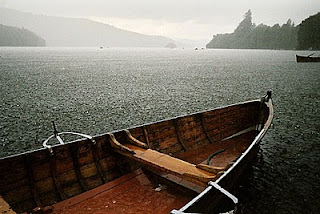 Starting on a lighter note, apart from being eye-pleasing and soothing to the ear, it’s one of the biggest misery-savers for lazy people like us who doesn’t want to make the trip to the carwash or for people who normally hit the shower once in a while. So,rain cleanses everything- It cleanses the atmosphere,the trees,the birds and the beasts, the cars and humans alike.Well, rain is so very indulging and has an appeal to all ages,alike. Although it is not at all welcome when you are in a hurry to go out, or you just finished painting your house or the fence , or like in India- you just made a fresh batch of pickle or “ bori “ all ready to go out for sunbathing or the “ lep, toshok aar daami sarees “ have just been put out after having stayed untouched by the sun for a long time.

When you’re a child, the only thing you wanted was to jump in the muddy puddles after a rain , on your way home from school. And if it rained torrentially, it meant it’s RAINY DAY at school and we prayed for some miracle so that it continues like that for another week at the least but only during the morning hours, so that you can go out to play during the afternoon .

And then as one grew older, the same rain , brought out a different person in us. It was the same old rain but with a different appeal, and so enchanting, that you always hoped you were not alone but with someone at this very moment , who would see this sight as you see it and feel it the same way as you do. It was funny how the songs and poems started to come naturally to your mind as soon as the sky turned gray.

Those memories of “ Kaalboisakhi “ – the afternoon thunderstorms during summer, so common in West Bengal , still haunts me.It’s been a long time since I’ve experienced one..Perhaps, I fell in love with the rain because of the awe that “ Kaalboisakhi “ created in my mind . Suddenly the sky would start turning to slate and then to black, the clouds would start rolling and rumbling, and then there will be wind...sweeping everything away, followed by rain, in abundance. As long as the wind was bearable and the rain didn’t soak me, I used to sit out in the balcony and watch the whole course of action unfold itself gradually…Sometimes, my brother and I would run around in the gusty wind, collecting unripe baby mangoes that have fallen from our tree .. After the rain , the sky would be glowing with happiness, the clouds all effulgent and beaming , as if God was smiling and sometimes there will be an entrancing rainbow , which thrilled us to the cores and we used to count the number of bands of the VIBGYOR that’s visible and who can see which color first .

Now, in a different part of the world and at much grown-up stage of my life, it has the same appeal as it always had– As I sit on my sofa with a cup of tea in one hand and the latest novel of Nicholas Sparks in another, I become aware of the imminent rain..The sky is the same slaty gray, and the trees seemed greener because of this beautiful color contrast . The greenish black water of the lake, the Mallards playing around, the sudden rustling and the shaking of the leaves of the palm tree, their shadows and the silence of the world around, earnestly awaiting the rain, play an orchestrated tune in my mind. And they all were satisfied, and so was I …the trees were polished green, the lakes filled up to the brim of overflowing, the Mallards all bathed and shiny, and I, like all the other times , was full of unspoken admiration for Rabindranath Tagore, because he could capture the beauty of this, like no one ever did.