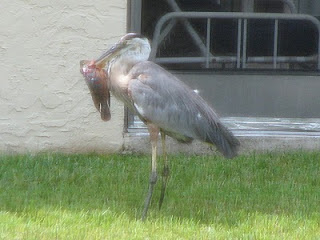 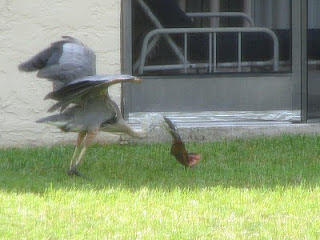 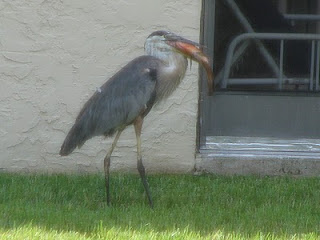 New house,new view ..And what a view,I must say !! First day of being alone and unpacking..my eyes caught sight of some action in progress !! Let me say,apart from TV channels,movies and magazines …I’ve never seen anything like this..Predator-Prey relationship ..in action..

Well, I once saw a turtle killing a grackle ( a kind of bird,resembles a crow ) – The grackle was bothering the turtle for quite some time, pecking at it continuously and trying to push it back into the lake..and the turtle reached the heights of it’s patience and bit the grackle’s neck…and stayed latched on like that for a long time,until the bird died…But that was not a predator-prey relationship..just one of those small fights of nature ~

I was staring out into the open and saw the great blue heron, a very frequent visitor around here,holding something big and red in it’s mouth..I rushed outside with my camera and yes,I guessed right-It was a huge fish-shiny,with red,blue,silver tints on it’s body-hanging from the heron’s mouth…I tried to take as many pictures as possible,the distance and the meshed net of my balcony created obstacles – I was tensed as I was expecting the fish will disappear in a few moments and I won’t be able to capture this event...But there was a twist in store for the three of us- Heron,Mr.Fish and me !!

…The fish was too big for the heron to swallow…It was dangling from it’s mouth while the heron stood still ..my guess is it was contemplating a way to kill it ..It tried and tried to swallow,maneuvering it’s long neck in various fashions-Failing to have the desired effect, it lay the fish on the grass-The fish starting jumping and dancing around franctically…Now, the heron took it’s time and landed a few serious jabs,stabbing the fish with it’s sharp bills…And then repeated the same process of swallowing it whole ..This continued for a good length of time and to my surprise-it let go of the fish,back into the placid lake …

The very common predator-prey relationship of nature..and though not common,but the prey often wins-even if it’s smaller and weaker than the predator-It does win sometimes - using several survival tactics,sometimes using it’s sheer intelligence,sometimes just being of a advantageous size and shape …And when the prey wins, the onlookers-Us-feel so happy,mostly because the prey is weak,small and helpless- But with clearer thinking,sometimes our perspective changes-If the predator doesn’t hunt,it won’t have anything to sustain on and that will make it weak and helpless..Now that the predator failed, it has to go through so much struggle to find something else to eat and feed it’s young ones .That’s what is called LIFE ..

Humans don’t think when they eat their food-how much we are killing for our survival and fanciful enjoyments..We are the largest predator that can ever be- We tend to enjoy a wide array of nature’s resources.. ….

Whevener I feel sad for the prey ,I tend to direct my thoughts to the predator-It has to eat and survive too !! And if it’s any consolation,the prey itself is a predator to a lot many creatures …The circle of life- an unique machine of this earth-The predator hunts on the prey…the fittest survives, leaving the predator hungry and frustrated ..The predator is a prey to a bigger predator and prey is a predator to a smaller prey..Let your thoughts stay on this thought and keep the circle of life rolling,eternally ~ ~