Maternal instincts in the wild !! 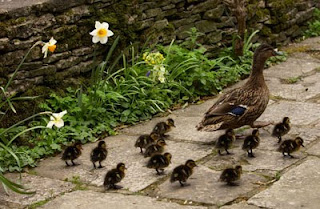 A strawberry Poison-dart frog….lays her eggs,as expected,in a pool of water-and when the eggs hatch-the momma frog gets apprehensive-To make sure the tadpoles survive,she carries,each one,one at a time,to different water-filled spaces,like the bromeliad axils (which are epiphytic i.e. growing on another tree trunk ) and deposit them there-separate spaces are important,otherwise the tadpoles will eat each other during the growing process….The frog often makes a climb of half a mile to one mile up a tree to search for separate water-filled spaces or bromeliads-each time it carries a tadpole.There is not only so much toil behind this entire up and down and nursery-searching process, but sacrifice and maternal thoughts,even in an amphibian.

And she doesn’t stop at this- she visits the growing tadpoles every few days and deposits one of her unfertilized eggs- source of food for the growing young ones …..

An octopus,slimy and weird looking as it is, is a creature deserving commendation for it’s parental techniques !! A male octopus dies after mating…and the female lays the eggs-sometimes 200,000 together,after a few days and hangs them in strings from her nest-They look like clusters of grapes from vines. She stops eating entirely, so that she doesn’t have to go out to hunt and leave her embryos in danger ….She sometimes has to sustain out of her own body parts- She,like a caring mother,gently sways water over the eggs, to ensure they get a constant supply of oxygen. And once the eggs are almost ready to hatch, the mother octopus leaves the lair and is too weak to survive the attack of her predators…She sacrifices her life so that there wouldn’t be any competition for food between her and her young ones ~ ~

Maternal instinct exists in perhaps all the living creatures- It is us,humans, who fail to see it or realize it, bcoz we are too pressed for time, are selfish and busy, taking pride in our intelligence, which we have successfully used in wiping out hundreds of species from this earth- species whose maternal instincts we would never come to know !!